Showing posts with the label Ibn-e-Rafique
Show all 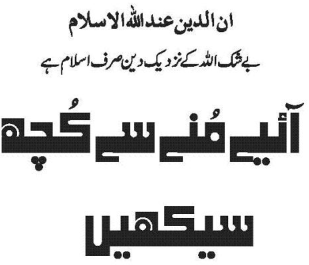 Aiye Munnay Say Kuch Sekhain, Ibn-e-Rafique, Personality Development, آئیے منے سے کچھ سیکھیں, ابن رفیق, شخصیت کی نشونما,  The religion of the Holy Prophet has been completed and now there is no room for any increase or decrease in it. Anything done as a religion which was not done by the Holy Prophet and his Companions falls under the category of innovation. Such an act becomes an eagle instead of a reward. But today we see that many unscrupulous scholars are not only engaged in the promotion of innovations and superstitions but are also playing with the faith of the people by offering them innumerable rewards. The pamphlet under review, "Let's learn something from Mane" has been prepared to free the people from the clutches of such mullahs. The pamphlet is supposed to be a fictitious celebration which raises questions about many popular innovations prevalent in our society and then discusses them with the Shariah texts. Download
Post a Comment
Read more
More posts