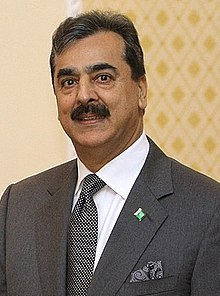 Syed Yousaf Raza Gillani, also spelled Gilani (Urdu: یوسف رضا گیلانی; pronounced [ˈjuːsʊf rəˈzaː ɡɪˈlaːniː] born 9 July 1952), is a Pakistani politician who served as 18th Prime Minister of Pakistan from 25 March 2008 until his retroactive disqualification and ouster by the Supreme Court of Pakistan on 26 April 2012. He currently serves as the vice-chairman of the central executive committee of the Pakistan Peoples Party. and in 2021 was elected as a Senator. On 26 March 2021, He was appointed as Leader of Opposition in Senate of Pakistan.

After 1988 general elections, he secured his ministerial appointment in the Ministry of Tourism in the government of former prime minister Benazir Bhutto, and since then, he had been a senior member of parliament for the Multan District. After his party securing the plurality in the 1993 general elections, Gillani was elevated 15th Speaker of the National Assembly by the-Prime minister Benazir Bhutto, a post he held until 16 February 1997 On 11 February 2001, Gillani was imprisoned in Adiala Jail by a military court instituted under President Pervez Musharraf on accusations and charges of corruption, and released on 7 October 2006.

In the wake of 2008 general elections, his party formed a four-party coalition alliance and nominated him for the office of Prime minister. He is the first prime minister that holds the distinction (thus far, the only prime minister to have achieve this milestone) for successfully presenting five consecutive federal budgets. As Prime minister, Gillani announced the formation of the Truth and Reconciliation Commission, rehabilitation of the troubled and war-torn tribal belt, and promised to reduce the federal budget deficit as well as announcing his ambitions to improve the system of education. This was followed by announcing the new agriculture, land and economic policy that lifted the bans on labour and students' unions, while worked and implemented the new energy and nuclear policies to tackle the energy crisis in the country. But his policies, without meaningful economic reforms, led to a high rise in inflation and sharp decline in economic performance, a period referred to as "Era of Stagflation".

A consistently strong US ally as Prime Minister, Gillani was ranked as 38th most powerful person in the world by Forbes. After years of confronting and resisting the Supreme Court of Pakistan rulings to reinstate the corruption cases against Benazir and Asif Zardari, he was convicted by the supreme court of violating the article 63(1)(g) of the constitution of Pakistan, on 26 April 2012. The verdict was rendered by the Supreme Court when it found him the guilty of contempt of court for refusing to reopen corruption cases against president Asif Ali Zardari, but it gave him only a symbolic sentence "till the rising of the court", a sentence lasting 30 seconds. Finally, on 19 June 2012, he was disqualified and ousted by the Supreme Court from holding the prime minister office, with the Chief Justice Iftikhar Chaudhry clarifying that: "Gillani had ceased to be [the] prime minister and (is) disqualified from membership of parliament on 26 April 2012, the date of his conviction"..

His disqualification term was ended in April 2017 and Supreme Court allowed him to contest in 2018 Pakistani general election. He was PPP's candidate for Islamabad's general seat in the 2021 Senate Elections. He defeated the incumbent government's candidate Minister of Finance Dr. Abdul Hafeez Shaikh in a major upset victory, prompting the incumbent PM Imran Khan to take a vote of confidence from the National Assembly.

On 12 March 2021, He contested for chairman of senate of Pakistan and lost to his rival Sadiq Sanjrani. With 7 votes in his favor rejected, Gilani received 42 votes, compared to his rival who received 48 votes.

Syed Yousuf Raza Gillani was born on 9 June 1952 in Multan, Punjab, West-Pakistan. Gillani moved to Lahore, Punjab. He attended Government College University and obtained his B.A. in Journalism in 1970, and followed by an MA in Political journalism from the University of the Punjab in 1976. In an interview given to Vasatolah Khan of BBC Urdu, Gilani maintained that "if he had not pursue his career in the national politics, he would have been a civil engineer.”

Gillani is married to Fauzia Gillani, together they have four sons and one daughter, and five grandchildren. His eldest son, Abdul Qadir Gillani, started his own political career from Multan, and in 2008 he married the granddaughter of Pir Pagara Shah Mardan Shah II, an influential political and religious leader of Sindh. Abdul Qadir is alleged to have been involved in a corruption case over arrangements for pilgrims to Mecca and in a scandal at a state-owned insurance company. Gillani's three other sons Ali Qasim Gillani, Ali Musa Gillani and Ali Haider Gillani are triplets. Qasim Gillani is currently doing his undergraduate studies at Brunel University of London. Gillani's daughter Fiza Gillani is the Good-Will Ambassador of Women and has one son called Asfandyar Gillani. Musa Gillani completed his Masters at Queen Mary University of London in 2009 and was an MNA in his father's cabinet. Ali Haider Gillani studied at School of Economics in Lahore. Ali Musa Gillani after completing his studies is now actively participating in politics. Ali Musa was questioned by the Anti-Narcotics Force (ANF) agents over a scandal.

On 9 May 2013, his son, Ali Haider Gilani, was kidnapped by several armed men in Multan in central Pakistan during an election rally. A group called the Al Mansuri Brigade kidnapped him. He spent three years in captivity, before being rescued in a joint operation between American-led NATO special forces and Afghan forces in May 2016.

Yousaf Raza Gillani's political career started in the military government of President General Zia-ul-Haq in 1978, after he joined as a member of the Central Working Committee (CWC) of the Pakistan Muslim League (PML), alongside industrialist Nawaz Sharif. He soon left the PML, because of political differences with the PML's leadership. He was chosen by General Zia-ul-Haq as a nominee for public servant work in Multan. In 1983, Gillani was elected as the chairman of the District Council Multan commonly known as District Mayor or Zila Nazim in Pakistan.

He first ran in non-partisan and technocratic 1985 general elections and was elected as the Member of the National Assembly (MNA) of Parliament from Lodhran, but was later affiliated with the Pakistan People’s Party after developing serious political differences with the Pakistan Muslim League (PML), led by conservative leader Fida Khan. Gillani fell out with Prime minister Mohammad Junejo and was sidlined from the Pakistan Muslim League (PML) by the senior leadership. Later, he was ousted by Prime minister Junejo and was replaced by other members. According to Gillani's personal account, he went to Karachi to meet with Benazir Bhutto during the 1980s and presented his political experience, wanting to join the Peoples Party. After securing a party ticket and successfully running in the 1988 general elections, Gillani joined the first government of Prime minister Benazir Bhutto and became minister of the Ministry of Tourism (MoT) in March 1989 until January 1990. Later he became minister of Ministry of Housing and Work Force.

Gillani also retained his seat in the 1990 general elections by gaining more than 60 Thousand votes. He once again successfully ran in the 1993 general elections and took the oath of the office of Minister for Ministry of Local Government and Rural Development. However, he resigned from his ministry after being nominated by Benazir Bhutto for office of the Speaker of the National Assembly of Pakistan in 1993. He was the Speaker of the National Assembly of Pakistan until 1997 when the new general election in 1997 was held in the country. He was succeeded by Ilahi Bux Soomro of the Pakistan Muslim League-N on 2 February 1997.

Yousaf Raza Gillani was arrested on 11 February 2001 by the Military Police functioning under the military-controlled National Accountability Bureau (NAB)— an anti-corruption agency set up by the military government in 1999, over charges that he, along with other politicians, misused his authority while he was Speaker of the National Assembly in 1993–97. Specifically, he was accused of hiring up to 600 people from among his constituents and placing them on the government's payroll. The NAB claimed that Gillani inflicted a loss of Rs 30 million annually on the national exchequer. He was convicted by an anti-corruption court headed by an active-duty officer appointed by General Musharraf and spent nearly six years in prison.

The legal proceedings were perceived by many as politically motivated; his party, the PPP, was in opposition to Musharraf, who had embarked on a campaign to coerce party members to switch sides. Thus his conviction by General Musharraf-backed courts and subsequent prison sentence were seen as marks of loyalty within the PPP. His imprisonment was widely condemned by various individuals across the country, including Mushahid Hussain Syed, a senior leader of the PML-Q. He was released on 7 October 2006 from Adiala Jail, after spending more than five years in captivity. On 26 April 2012, Prime minister Gillani was convicted on the charges of Contempt of Court, becoming Pakistan's first Prime Minister to be convicted while holding office. He was sentenced to be held in custody till the rising of court, a symbolic sentence lasting 30 seconds.

On 22 March 2008, after weeks of consideration, the elite members of the Central Executive Committee accepted the nomination of Gillani over populist Ameen Faheem for the post of prime minister. Meanwhile, the Pakistan Peoples Party completed consultations and negotiations with the other parties to form a coalition alliance and the alliance endorsed the nomination. The formal announcement of the name of prime minister was expected to be made that night.

On 22 March at 9:38 pm Islamabad, (16:38 GMT), Gillani was officially announced by the peoples party as its candidate for the premiership of the country. Many analysts said that they would not be surprised if Zardari succeeded Gillani after a few months. It was reported on 24 March 2008, that Zardari said he was not interested in the job of prime minister and that Gillani would serve until 2013 in the position. Speculation that Zardari might be gunning for the premiership grew stronger when he picked the less popular Gillani over Ameen Faheem, a much powerful member of the central executive committee. Fahmida Mirza, the newly elected Speaker of the Assembly, insisted there was no plan to replace Gillani. She added, however, that if Gillani did not do a good job, all options were open.

On 24 March 2008, Gillani was elected Prime Minister by Parliament, defeating his rival, Chaudhry Pervaiz Elahi of the PML-Q, by a score of 264 to 42. He was sworn in by Musharraf on the next day. On 29 March, he won a unanimous vote of confidence in Parliament.