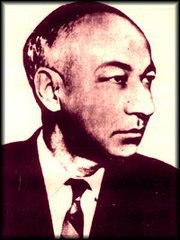 Syed Ali Abbas Jalalpuri (Urdu: سید علی عباس جلالپوری‎) was a professor of philosophy in Government College Lahore. He is regarded by the intellectuals of Pakistan as the Will Durant of Pakistan. He had master's degrees in Philosophy, Persian and Urdu. He wrote more than fourteen books on Philosophy, History, and Religion in Urdu language. He was known as a first-rate scholar, and his books seemed to herald an age of reason in Pakistan.

Like The Dictionnaire Historique et Critique of Pierre Bayle and The Philosophical Dictionary of Voltaire, he wrote a philosophical dictionary, 'Khird Nama Jalalpuri' to explain subject's terminologies in Urdu. He also wrote "Jinsiyati Mutaley" (A Study of Sex), which presented a great research work on the subject in Urdu language.

Ruh-e-Asar ( Zeit Geist or The Spirit of the Age)

"Ali Abbas Jalalpuri was a very rigorous historian of Philosophy and Epistemology. As the dominant mode of Philosophy in Indian Subcontinent has been “Analytical” I include him in the first trend as well. He is amongst first of the Modern Pakistani academics who took interest in the “Question of Civilization”, “History of Ideas” and “Academic Clarity”, “Relationship of Metaphysics, Language and Folklore”, the questions which would eventually become most important issues for European Philosopher especially after “Structuralist” revolution in Paris. Jalalpuri was aware of the inconsistencies and contradictions in explaining Iqbal when subjected to traditional Analytical Model of Philosophy. Where to place Iqbal in the Web of Modern Philosophical Ideas?” was the question he faced and he thought he had theperfect solution. Instead of trying to put Iqbal in the Project of Modernity and face the problem of Contradiction, Jalalpuri placed Iqbal among the traditional Islamic Philosophers or the “Kalamist”. So the “Paradox” is “Avoided”, Instead of Philosopher, Iqbal is a “Schoolmen” trying to complete “Islamic Scholasticism” after Ghezali. Jalalpuri is rigorous in his work. due to non existent academy, the trend ended with him. “Completing Islamic Scholasticism” is certainly a part of Iqbal’s work, but it’s a Part, not the whole."

"In 1971, Ali Abbas Jalalpuri wrote a very comprehensive critique of Iqbāl’s theology of modernity. He faults Iqbāl for selective and arbitrary interpretation of the Qur’ānic verses. To him, ambivalence towards pantheism and Ibn Arabi (d. 1240) at some places, his devotion to the pantheist Rumi, and his idea of Absolute Ego make it clear that Iqbāl’s theology has deep roots in pantheism."

Read Books of this Author