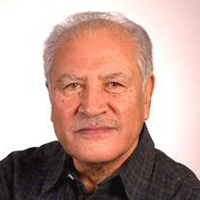 Raza Ali Abidi (Urdu: رضا علی عابدی‎; born 30 November 1935) is a Pakistani journalist and broadcaster who is best known for his radio documentaries on the Grand Trunk Road in Pakistan (called Sher Shah Suri Marg in India) and his travelogue along the banks of Indus River. His published works include several collections of cultural essays and short stories. He has worked with the BBC Urdu Service and retired in 1996.

Raza Ali Abidi was born in 1935. He moved to Karachi, Pakistan with his family in 1950. He graduated from Islamia College, Karachi and worked for 15 years as a little-known journalist. Then he moved to London and worked for BBC from 1972 to 2008.

"Raza Ali Abidi is a writer of consequence because of his travels. He owes almost all his writings to his travels but he doesn't travel at random." In November 2013, he was awarded an honorary doctorate degree by The Islamia University of Bahawalpur for his services in the field of broadcasting, journalism and arts. He was also honored as adjunct professor by the same institute. The Islamia University, Bahawalpur has recently been declared as the top higher education institute in Southern Punjab, by the Higher Education Commission of Pakistan.

Tehzeeb Foundation in Pakistan awarded him 'The Literature Award' in 2013