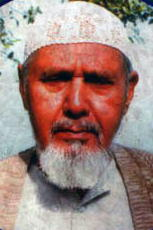 Qudrat Ullah Shahab (or Qudratullah Shahab, Urdu: قدرت ﷲ شہاب‎; 26 February 1917 – 24 July 1986) was an eminent Urdu writer and civil servant from Pakistan. Shahab holds the distinction of having served as the Principal Secretary to three heads of state; Governor General Ghulam Muhammad, President Iskander Mirza and President Ayub Khan. He went on to serve as the Ambassador of Pakistan to the Netherlands in 1962 and later as Information Secretary of Pakistan and Education Secretary of Pakistan.

Shahab was born in Gilgit on 26 February 1917. His father, Abdullah Sahib, belonged to the Arain tribe of Chimkor Sahib Village, district Ambala, and was a student at Muhammadan Anglo-Oriental College and a protégé under the supervision of Sir Syed Ahmed Khan. Abdullah Sahib later migrated from Aligarh and settled down in Gilgit. Shahab first rose to prominence when, at sixteen, an essay he penned was selected for the first prize in an international competition organized by the Reader's Digest, London, and, in 1941, for being the first Muslim from Jammu and Kashmir qualifying for the Indian Civil Service. He later moved to Karachi Pakistan after the separation of sub-continent and took charge of Under-Secretary (Import and Export), Ministry of trade, of the newly formed independent state. He also served as the first Secretary General (later the position was renamed as Chief Secretary) of Govt. Of Azad Jammu and Kashmir.

Shahab published in English and Urdu languages for contemporary newspapers and magazines of Pakistan Writers' Guild, founded at Karachi in January 1959.

Shahab's essay "Maaji" poetically outlines the simplicity of his mother and the relationship that his parents shared, detailing migration, governorship, family dynamics and death in a short chapter.

He is best known for his autobiography Shahab Nama.

The real disclosure came in the final chapter of Shahab Nama that alluded to an out-of-world personality whom he used to call Ninety as his spiritual guide. After Shahab Nama published, which was actually after Shahab's death, Mufti wrote his autobiography, Alakh Nagri, and openly discussed the hidden traits of Shahab's life. Mufti wrote in the foreword of the book:

Since Shahab has opened his own secrets in the last chapter of Shahab Nama, I find no reason not to share experiences which I witnessed about the mysticism of Shahab"

Mumtaz Mufti made him the subject of his autobiography Alakh Nagri and later dedicated another book Labbaik. Bano Qudsia, a veteran Urdu writer, wrote a book Mard-e-Abresham on Shahab's personality. A collection of essays about Qudrutullah Shahab has been compiled in a book, Zikr-e-Shahab.

Shahab died on 24 July 1986 in Islamabad and is buried in H-8 Graveyard, Islamabad Pakistan.