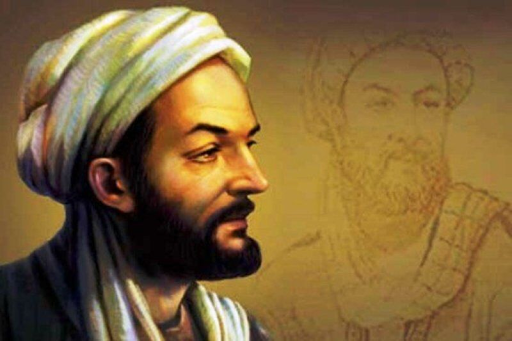 Ibn Sina also known as Abu Ali Sina, and often known in the West as Avicenna (c. 980 – June 1037), was a Persian polymath who is regarded as one of the most significant physicians, astronomers, thinkers and writers of the Islamic Golden Age,[7] and the father of early modern medicine. Sajjad Rizvi has called Avicenna "arguably the most influential philosopher of the pre-modern era". He was a Muslim Peripatetic philosopher influenced by Greek Aristotelian philosophy. Of the 450 works he is believed to have written, around 240 have survived, including 150 on philosophy and 40 on medicine.

His most famous works are The Book of Healing, a philosophical and scientific encyclopedia, and The Canon of Medicine, a medical encyclopedia which became a standard medical text at many medieval universities and remained in use as late as 1650.

Avicenna created an extensive corpus of works during what is commonly known as the Islamic Golden Age, in which the translations of Byzantine Greco-Roman, Persian, and Indian texts were studied extensively. Greco-Roman (Mid- and Neo-Platonic, and Aristotelian) texts translated by the Kindi school were commented, redacted and developed substantially by Islamic intellectuals, who also built upon Persian and Indian mathematical systems, astronomy, algebra, trigonometry and medicine. The Samanid dynasty in the eastern part of Persia, Greater Khorasan and Central Asia as well as the Buyid dynasty in the western part of Persia and Iraq provided a thriving atmosphere for scholarly and cultural development. Under the Samanids, Bukhara rivaled Baghdad as a cultural capital of the Islamic world There, the study of the Quran and the Hadith thrived. Philosophy, Fiqh and theology (kalaam) were further developed, most noticeably by Avicenna and his opponents. Al-Razi and Al-Farabi had provided methodology and knowledge in medicine and philosophy. Avicenna had access to the great libraries of Balkh, Khwarezm, Gorgan, Rey, Isfahan and Hamadan. Various texts (such as the 'Ahd with Bahmanyar) show that he debated philosophical points with the greatest scholars of the time. Aruzi Samarqandi describes how before Avicenna left Khwarezm he had met Al-Biruni (a famous scientist and astronomer), Abu Nasr Iraqi (a renowned mathematician), Abu Sahl Masihi (a respected philosopher) and Abu al-Khayr Khammar (a great physician).

Avicenna was born c. 980 in Afshana, a village near Bukhara (in present-day Uzbekistan), the capital of the Samanids, a Persian dynasty in Central Asia and Greater Khorasan. His mother, named Sitāra, was from Bukhara. While, according to most scholars, most of Avicenna's family were Sunnis, his father, Abdullāh, was a respected scholar from Balkh (in present-day Afghanistan) who might have converted to Ismailism or remained a Sunni. It was an important town of the Samanid Empire, in what is today Balkh Province, Afghanistan. His father worked in the government of Samanid in the village Kharmasain, a Sunni regional power. After five years, his younger brother, Mahmoud, was born. Avicenna first began to learn the Quran and literature in such a way that when he was ten years old he had essentially learned all of them.

According to his autobiography, Avicenna had memorised the entire Quran by the age of 10. He learned Indian arithmetic from an Indian greengrocer, Mahmoud Massahi and he began to learn more from a wandering scholar who gained a livelihood by curing the sick and teaching the young. He also studied Fiqh (Islamic jurisprudence) under the Sunni Hanafi scholar Ismail al-Zahid. Avicenna was taught some extent of philosophy books such as Porphyry's Introduction (Isagoge), Euclid's Elements, Ptolemy's Almagest by an unpopular philosopher, Abu Abdullah Nateli, who claimed philosophizing.

As a teenager, he was greatly troubled by the Greek Metaphysics of Aristotle, which he could not understand until he read al-Farabi's commentary on the work. For the next year and a half, he studied philosophy, in which he encountered greater obstacles. In such moments of baffled inquiry, he would leave his books, perform the requisite ablutions, then go to the mosque, and continue in prayer till light broke on his difficulties. Deep into the night, he would continue his studies, and even in his dreams problems would pursue him and work out their solution. Forty times, it is said, he read through the Metaphysics of Aristotle, till the words were imprinted on his memory; but their meaning was hopelessly obscure to him until he purchased a brief commentary by al-Farabi from a bookstall for three dirhams (a very low price at the time). So great was his joy at the discovery, made with the help of a work from which he had expected only mystery, that he hastened to return thanks to God, and bestowed alms upon the poor.

He turned to medicine at 16, and not only learned medical theory, but also by gratuitous attendance of the sick had, according to his own account, discovered new methods of treatment.[34] The teenager achieved full status as a qualified physician at age 18, and found that "Medicine is no hard and thorny science, like mathematics and metaphysics, so I soon made great progress; I became an excellent doctor and began to treat patients, using approved remedies." The youthful physician's fame spread quickly, and he treated many patients without asking for payment.

A number of theories have been proposed regarding Avicenna's madhab (school of thought within Islamic jurisprudence). Medieval historian Ẓahīr al-dīn al-Bayhaqī (d. 1169) considered Avicenna to be a follower of the Brethren of Purity. On the other hand, Dimitri Gutas along with Aisha Khan and Jules J. Janssens demonstrated that Avicenna was a Sunni Hanafi. Avicenna studied Hanafi law, many of his notable teachers were Hanafi jurists, and he served under the Hanafi court of Ali ibn Mamun. Avicenna said at an early age that he remained "unconvinced" by Ismaili missionary attempts to convert him. However, the 14th century Shia faqih Nurullah Shushtari according to Seyyed Hossein Nasr, claimed he was a Twelver Shia. Conversely, Sharaf Khorasani, citing a rejection of an invitation of the Sunni Governor Sultan Mahmoud Ghazanavi by Avicenna to his court, believes that Avicenna was an Ismaili. Similar disagreements exist on the background of Avicenna's family, whereas most writers considered them Sunni, recent Shiite writers contested that they were Shia.

Avicenna's first appointment was that of physician to the emir, Nuh II, who owed him his recovery from a dangerous illness (997). Avicenna's chief reward for this service was access to the royal library of the Samanids, well-known patrons of scholarship and scholars. When the library was destroyed by fire not long after, the enemies of Avicenna accused him of burning it, in order for ever to conceal the sources of his knowledge. Meanwhile, he assisted his father in his financial labours, but still found time to write some of his earliest works.

At 22 years old, Avicenna lost his father. The Samanid dynasty came to its end in December 1004. Avicenna seems to have declined the offers of Mahmud of Ghazni, and proceeded westwards to Urgench in modern Turkmenistan, where the vizier, regarded as a friend of scholars, gave him a monthly stipend. The pay was small, however, so Avicenna wandered from place to place through the districts of Nishapur and Merv to the borders of Khorasan, seeking an opening for his talents. Qabus, the generous ruler of Tabaristan, himself a poet and a scholar, with whom Avicenna had expected to find asylum, was on about that date (1012) starved to death by his troops who had revolted. Avicenna himself was at this time stricken by a severe illness. Finally, at Gorgan, near the Caspian Sea, Avicenna met with a friend, who bought a dwelling near his own house in which Avicenna lectured on logic and astronomy. Several of his treatises were written for this patron; and the commencement of his Canon of Medicine also dates from his stay in Hyrcania.

Avicenna subsequently settled at Rey, in the vicinity of modern Tehran, the home town of Rhazes; where Majd Addaula, a son of the last Buwayhid emir, was nominal ruler under the regency of his mother (Seyyedeh Khatun). About thirty of Avicenna's shorter works are said to have been composed in Rey. Constant feuds which raged between the regent and her second son, Shams al-Daula, however, compelled the scholar to quit the place. After a brief sojourn at Qazvin he passed southwards to Hamadãn where Shams al-Daula, another Buwayhid emir, had established himself. At first, Avicenna entered into the service of a high-born lady; but the emir, hearing of his arrival, called him in as medical attendant, and sent him back with presents to his dwelling. Avicenna was even raised to the office of vizier. The emir decreed that he should be banished from the country. Avicenna, however, remained hidden for forty days in sheikh Ahmed Fadhel's house, until a fresh attack of illness induced the emir to restore him to his post. Even during this perturbed time, Avicenna persevered with his studies and teaching. Every evening, extracts from his great works, the Canon and the Sanatio, were dictated and explained to his pupils. On the death of the emir, Avicenna ceased to be vizier and hid himself in the house of an apothecary, where, with intense assiduity, he continued the composition of his works.

Meanwhile, he had written to Abu Ya'far, the prefect of the dynamic city of Isfahan, offering his services. The new emir of Hamadan, hearing of this correspondence and discovering where Avicenna was hiding, incarcerated him in a fortress. War meanwhile continued between the rulers of Isfahan and Hamadãn; in 1024 the former captured Hamadan and its towns, expelling the Tajik mercenaries. When the storm had passed, Avicenna returned with the emir to Hamadan, and carried on his literary labors. Later, however, accompanied by his brother, a favorite pupil, and two slaves, Avicenna escaped from the city in the dress of a Sufi ascetic. After a perilous journey, they reached Isfahan, receiving an honorable welcome from the prince.

The remaining ten or twelve years of Avicenna's life were spent in the service of the Kakuyid ruler Muhammad ibn Rustam Dushmanziyar (also known as Ala al-Dawla), whom he accompanied as physician and general literary and scientific adviser, even in his numerous campaigns.

During these years he began to study literary matters and philology, instigated, it is asserted, by criticisms on his style. A severe colic, which seized him on the march of the army against Hamadan, was checked by remedies so violent that Avicenna could scarcely stand. On a similar occasion the disease returned; with difficulty he reached Hamadan, where, finding the disease gaining ground, he refused to keep up the regimen imposed, and resigned himself to his fate.

His friends advised him to slow down and take life moderately. He refused, however, stating that: "I prefer a short life with width to a narrow one with length".[39] On his deathbed remorse seized him; he bestowed his goods on the poor, restored unjust gains, freed his slaves, and read through the Quran every three days until his death. He died in June 1037, in his fifty-sixth year, in the month of Ramadan, and was buried in Hamadan, Iran.