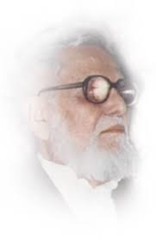 Amin Ahsan Islahi (امین احسن اصلاحی) (1904 – 15 December 1997) was a Pakistani Muslim scholar, famous for his Urdu exegeses of Quran, Tadabbur-i-Qur’an (Pondering on the Quran) – an exegesis that he based on Hamiduddin Farahi's (1863 – 1930) idea of thematic and structural coherence in the Qur'an.

Amin Ahsan Islahi was born in 1904 at Bamhur village in Azamgarh, United Provinces (now Uttar Pradesh), British India (now India). After graduating from Madrasatul Islah in Azamgarh in 1922, he entered the field of journalism. He was the son in law of Chaudhry Abdul Rehman Khan. First he worked as an associated editor in "Khoonch" a children magazine. Then he edited a newspaper Madinah at Bijnor, India and also remained associated with "Sach", a newspaper taken out by Abdul Majid Daryabadi.

It was sometime in 1925, when Hamiduddin Farahi offered Amin Islahi to come and study the Qur’an with him. Amin Islahi abandoned his journalistic career to benefit from this opportunity. It was in this formative period of his life in which he learned from Farahi the principles of direct deliberation on the Book of Allah. During this time, he also taught the Qur’an and Arabic literature at the Madrasah.

After Farahi's death, Amin Islahi studied Hadith from a celebrated scholar of this discipline, Abdu’l Rahman Muhaddith Mubarakpuri. In 1936, Islahi founded the "Daira-i-Hamidiyyah", a small institute to disseminate the Qur’anic thought of Farahi. Under the auspices of this institute, he brought out a monthly journal "Al-Islah" in which he translated many portions of Farahi's treatises written in Arabic. The journal was published till 1939, after which it was discontinued.

Like Maulana Naeem Siddiqui, Maulana Muhammad Manzur Nu'mani and Maulana Abul Hasan Ali Hasani Nadwi, Islahi was among the founder members of the Jamaat-e-Islami, a religious party founded by the eminent Islamic scholar Mawdudi in 1941. During his seventeen-year stay in the party, he represented the intellectual element and remained a member of the central governing body, Majlis-i-Shura. During this period, he did the groundwork needed to write a commentary of the Qur’an – an objective which he had set before him early in life. In 1956, when the Government of Pakistan set up the Islamic Law Commission, Imam Islahi – also an eminent expert on Islamic law – served as a member until the commission was abolished in 1958 by the martial law regime of General Ayub Khan. In 1958, he quit the party after serious differences arose between him and Mawdudi over some policy differences.

Amin Ahsan Islahi considered participating in elections a useless exercise for the purposes of bringing about an Islamic change. His thinking simply was that politicians can not establish Islam. Many politicians' aim is to gain power by any means necessary. He thought that if some people use the name of Islam, they do so to achieve their own political objectives.

In his view, those who would like to work for the cause of Islam and its revival should work among people selflessly, without any desire for gaining power. These workers should approach the people only to serve them, to educate them, and to help them reform their lives morally in the Islamic way of life.

After leaving the Jamaat-e-Islami, he finally got the chance to achieve his goal of writing a commentary of the Qur’an. He also launched a monthly journal Mithaq in which portions of this commentary, Tadabbur-i-Qur’an were published. In 1961, he established a small study circle Halqa-i-Tadabbur-i- Qur’an for college students to whom he taught Arabic language and literature, the Qur’an and Sahih Muslim. In 1965, a tragic incident brought an end to the journal as well as to the study circle: Islahi's eldest son Abu Saleh died in a plane crash. However, work on the commentary continued. In 1970–71, Islahi fell severely ill and had to discontinue all his intellectual pursuits. Later, he recovered quite miraculously. In 1972, he shifted to a countryside village near Sheikhupura, where he continued to work on the commentary till 1979, when he shifted back to Lahore. It was on the 29th of Ramadan 1400 (August 12, 1980) that he finished his work on Tadabbur-i-Qur’an that took twenty-two years to complete.

In 1981, Amin Ahasn Islahi founded the Idara-i-Tadabbur-i Qur’an-o Hadith, and appointed his close pupil Khalid Masud as first Nazim of this Idara (institution). Now it is being run under the supervision of Abdullah Ghulam Ahmed in Lahore, Pakistan. It remained the centre of all his intellectual activities until his death on 15 December 1997. A quarterly journal Tadabbur was taken out in 1981 as its organ. Khalid Masud was appointed its first editor and in charge till his death in Oct 2003. He gave weekly lectures on the text of the Qur’an. Later, he took up deep study on the principles of Hadith and began teaching the Al-Muwatta of Imam Malik in weekly sittings to a close circle of students and associates. After completing Al-Muwatta, he also taught some portions of Imam Bukhari’s Sahih Bukhari. Many of these lectures have been transcribed and published in the Tadabbur. Khalid Masud played a major role in converting Islahi's speeches and lectures into publication for benefits of the Islamic scholars and public.

Besides the nine volume Urdu Tafsir Tadabbur-i-Qur’an (Pondering on the Qura'n), Islahi started writing it in 1958 and finished it in 1980 (23 years total). Imam Islahi wrote a number of articles and authored a number of books on various topics of Islam, which includes:

Some of the works of Amin Ahsan Islahi

·         Imam Islahi also translated Farahi’s commentary consisting of fourteen Surahs of the Qur’an, as well as his following books from Arabic:

Amin Ahsan Islahi died in Lahore, Pakistan on 15 December 1997 at age 93. He is survived by two sons and two daughters. Some of his notable students in Pakistan are Khalid Masud, Javed Ahmad Ghamidi , Mahbub Subhani, Mahmud Ahmad Lodhi, Majid Khawar, Abdullah Ghulam Ahmad, Saeed Ahmad and Muhammad Da'ud. As a teacher, Amin Ahsan Islahi was described by many of them as very sensitive, courteous and a caring teacher. Islahi thought the most important thing in his life, was to explain and propagate the true understanding and knowledge of the Quran.

After his death, Khalid Masud was made responsible for his school of thought as his successor. Being in charge of Idara Taddabur-e Quran-o-Hadith.