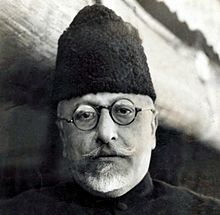 Abul Kalam Ghulam Muhiyuddin Ahmed bin Khairuddin Al-Hussaini Azad About this soundpronunciation (11 November 1888 – 22 February 1958) was an Indian independence activist, Islamic theologian, writer and a senior leader of the Indian National Congress. Following India's independence, he became the First Minister of Education in the Indian government. He is commonly remembered as Maulana Azad; the word Maulana is an honorific meaning 'Our Master' and he had adopted Azad (Free) as his pen name. His contribution to establishing the education foundation in India is recognized by celebrating his birthday as National Education Day across India.

As a young man, Azad composed poetry in Urdu, as well as treatises on religion and philosophy. He rose to prominence through his work as a journalist, publishing works critical of the British Raj and espousing the causes of Indian nationalism. Azad became the leader of the Khilafat Movement, during which he came into close contact with the Indian leader Mahatma Gandhi. Azad became an enthusiastic supporter of Gandhi's ideas of non-violent civil disobedience, and worked to organise the non-co-operation movement in protest of the 1919 Rowlatt Acts. Azad committed himself to Gandhi's ideals, including promoting Swadeshi (indigenous) products and the cause of Swaraj (Self-rule) for India. In 1923, at an age of 35, he became the youngest person to serve as the President of the Indian National Congress.

In October 1920, Azad was elected as a member of foundation committee to establish Jamia Millia Islamia at Aligarh in U. P. without taking help from British colonial government. He assisted in shifting the campus of the university from Aligarh to New Delhi in 1934. The main gate (Gate No. 7) to the main campus of the university is named after him.

Azad was one of the main organizers of the Dharasana Satyagraha in 1931, and emerged as one of the most important national leaders of the time, prominently leading the causes of Hindu-Muslim unity as well as espousing secularism and socialism. He served as Congress president from 1940 to 1945, during which the Quit India rebellion was launched. Azad was imprisoned, together with the entire Congress leadership. He also worked for Hindu-Muslim unity through the Al-Hilal newspaper.

Azad was born on 11 November 1888 in Makkah, then a part of the Ottoman Empire. His real name was Sayyid Ghulam Muhiyuddin Ahmed bin Khairuddin Al Hussaini, but he eventually became known as Maulana Abul Kalam Azad. Azad's father was a Bengali Muslim scholar of Afghan ancestry, who lived in Delhi with his maternal grandfather, as his father had died at a very young age. During the Indian Rebellion of 1857, he left India and settled in Mecca. His father Muhammad Khairuddin bin Ahmed Al Hussaini wrote twelve books, had thousands of disciples, and claimed noble ancestry, while his mother was Sheikha Alia bint Mohammad, the daughter of Sheikh Mohammad bin Zaher AlWatri, himself a reputed scholar from Medina who had a reputation that extended even outside of Arabia.

Azad settled in Calcutta with his family in 1890. Azad was home-schooled and self-taught.Following fluency in Arabic as a first language, Azad began to master several other languages including Bengali, Hindustani, Persian, and English. He was also trained in the Mazahibs of Hanafi, Maliki, Shafi'i and Hanbali fiqh, Shariat, mathematics, philosophy, world history, and science by tutors hired by his family. An avid and determined student, the precocious Azad was running a library, a reading room, and a debating society before he was twelve; wanted to write on the life of Al-Ghazali at twelve; was contributing learned articles to Makhzan (a literary magazine) at fourteen was teaching a class of students, most of whom were twice his age, when he was fifteen; and completed the traditional course of study at the age of sixteen, nine years ahead of his contemporaries, and brought out a magazine at the same age. In fact, he was publishing a poetical journal (Nairang-e-Aalam) and was already an editor of a weekly (Al-Misbah) in 1900, at the age of twelve and, in 1903, brought out a monthly journal, Lissan-us-Sidq, which soon gained popularity. At the age of thirteen, he was married to a young Muslim girl, Zulaikha Begum. Azad compiled many treatises interpreting the Qur'an, the Hadis, and the principles of Fiqh and Kalam.

Azad became an inspiring personality in the field of politics. Azad became an important national leader, and served on the Congress Working Committee and in the offices of general secretary and president many times. The political environment in India re-energised in 1928 with nationalist outrage against the Simon Commission appointed to propose constitutional reforms. The commission included no Indian members and did not even consult Indian leaders and experts. In response, the Congress and other political parties appointed a commission under Motilal Nehru to propose constitutional reforms from Indian opinions. In 1928, Azad endorsed the Nehru Report, which was criticised by the Ali brothers and Muslim League politician Muhammad Ali Jinnah. Azad endorsed the ending of separate electorates based on religion, and called for an independent India to be committed to secularism. At the 1928 Congress session in Guwahati, Azad endorsed Gandhi's call for dominion status for India within a year. If not granted, the Congress would adopt the goal of complete political independence for India. Despite his affinity for Gandhi, Azad also drew close to the young radical leaders Jawaharlal Nehru and Subhash Bose, who had criticised the delay in demanding full independence. Azad developed a close friendship with Nehru and began espousing socialism as the means to fight inequality, poverty and other national challenges. Azad decided the name of Muslim political party Majlis-e-Ahrar-ul-Islam. He was also a friend of Syed Ata Ullah Shah Bukhari, founder of All India Majlis-e-Ahrar. When Gandhi embarked on the Dandi Salt March that inaugurated the Salt Satyagraha in 1930, Azad organised and led the nationalist raid, albeit non-violent on the Dharasana salt works to protest the salt tax and restriction of its production and sale. The biggest nationalist upheaval in a decade, Azad was imprisoned along with millions of people, and would frequently be jailed from 1930 to 1934 for long periods of time. Following the Gandhi-Irwin Pact in 1931, Azad was amongst millions of political prisoners released. When elections were called under the Government of India Act 1935, Azad was appointed to organise the Congress election campaign, raising funds, selecting candidates and organising volunteers and rallies across India. Azad had criticised the Act for including a high proportion of un-elected members in the central legislature, and did not himself contest a seat. He again declined to contest elections in 1937, and helped head the party's efforts to organise elections and preserve co-ordination and unity amongst the Congress governments elected in different provinces.

At the 1936 Congress session in Lucknow, Azad was drawn into a dispute with Sardar Vallabhbhai Patel, Dr. Rajendra Prasad and C. Rajagopalachari regarding the espousal of socialism as the Congress goal. Azad had backed the election of Nehru as Congress president, and supported the resolution endorsing socialism. In doing so, he aligned with Congress socialists like Nehru, Subhash Bose and Jayaprakash Narayan. Azad also supported Nehru's re-election in 1937, at the consternation of many conservative Congressmen. Azad supported dialogue with Jinnah and the Muslim League between 1935 and 1937 over a Congress-League coalition and broader political co-operation. Less inclined to brand the League as obstructive, Azad nevertheless joined the Congress's vehement rejection of Jinnah's demand that the League be seen exclusively as the representative of Indian Muslims.